Soumitra Thakur was initiated into the world of music when, at the tender age of four, he began training in sitar under his uncle Shri Prashanta Thakur, who belongs to the rich heritage of Bishnupur Gharana.

Soumitra’s baaj reflects and carries influences from both the Maihar and the Imdadkhani Etawah Gharana because of his training and exposure to both the genres. 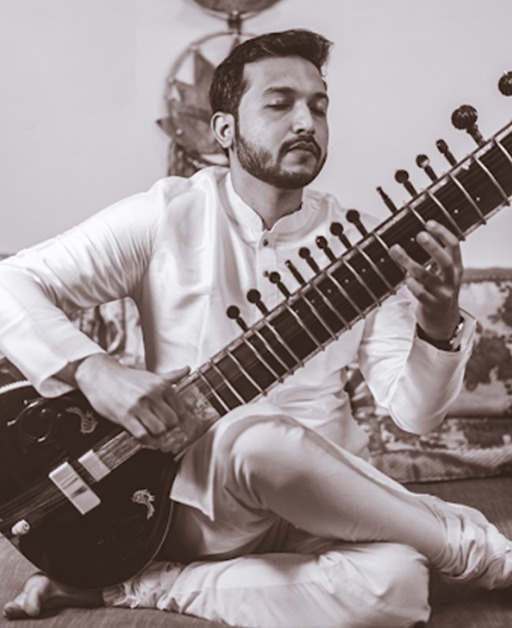 ❝ Music is essentially 12 notes between any octave. Twelve notes, and the octave repeats. It’s the same story, told over and over, forever. All any artist can offer the world is how they see those 12 notes ❞

Soumitra Thakur is an approved B High Grade Artist from All India Radio, who has received the Balshree Award (President's Award) for Creative Performance in 2009 from the then Honourable President of India, Smt Pratibha Patil.

He was awarded the 1st Position at the Doverlane Music Conference, Kolkata apart from being felicitated as the "Best Instrumentalist' for the year 2011-2012 there. He also performed for the subsequent festival there next year.

The sitar artist took part in the production of the musical adaptation of the critically acclaimed movie, The Monsoon Wedding, which was directed by Meera Nair. For the onstage production he got to work with veteran Bollywood director Vishal Bharadwaj. In January 2019. The next month he went on to collaborate with French musicians to perform across India under the aegis of Alliance Francaise.

In June that year, he participated in the Legends of Tomorrow Concert series organised by the Pracheen Kala Kendra.

Soumitra received the Senior and Junior Scholarships from the Ministry of Human Resource Development, Government of India in 2007 and 2014

He has performed at part of the "Rising and Promising artists of India" at National Centre of Performing Arts (N.C.P.A), Mumbai in March 2017 and at "Young Masters of India" organized by Shrutimandal, Jaipur in July 2017

Secured 1st Position at the 20th National Youth Festival Competition' in 2016. He was conferred upon the "Chacha Nehru Scholarship' from the National Council of Educational Research and Training (NCERT), India for Excellence in Creativity at the National Level from 2009 to 2012. He was also selected to perform at the 'Shakri Begum Memorial Trust (SMT), Kolkata, an institute pioneered by the legend Ustad Rashid Khan

The artist was invited to perform at the 34th National Games Celebrations at Jharkhand. He secured the First Position at the Uttar Pradesh Sangeet Natak Academy competition in 2014 apart from being awarded The Akhil Bhartiya Pratibha Puraskar 2017 from the Cultural Trust of India

Soumitra, apart from performing solo, has participated in several jugalbandis and collaborations with a bevy of national and international instrumentalists and vocalists. He is part of a group project 'Sangam' formed to bring a melodious amalgamation of Hindustani and Carnatic genres of Indian Classical music through fusing their respective styles and symphonies.

Soumitra has also been conducting regular workshops and lecture demonstrations at various schools and colleges to promote music and art amongst our youth.