Imbibing within herself the essence of Kathak of the Lucknow Gharana, its lyrical and sensuous movements, treasure of its scintillating rhythmic patterns and subtle abhinaya, Sangita Chatterjee entered the whirling world of beautiful dance under the tutelage of Guru Smt Vaswati Misra, one of the leading proponents of Lucknow Gharana Kathak. 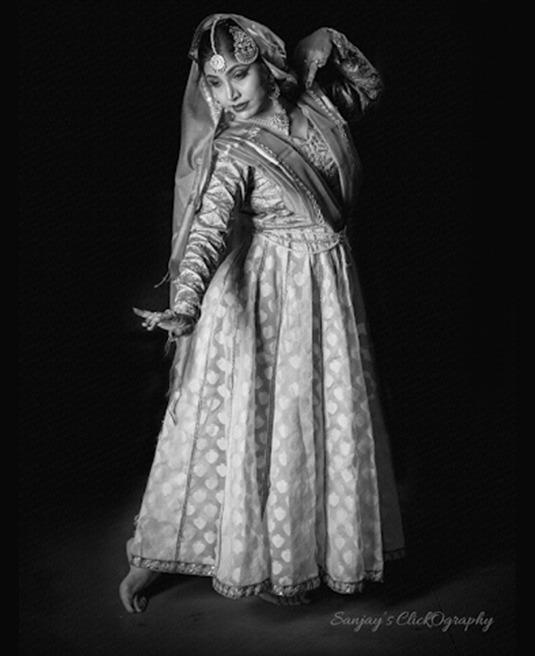 ❝ Dance for me is the ultimate satisfaction of human sensitivity, it is a source of liberation to attain the state of limitlessness ❞

Extending her expertise to the field of choreography, Sangita had the honour to choreograph for the occasion of the State Visit of Bangladesh Prime Minister to India at Rashtrapati Bhawan in the presence of then President Shri Pranab Mukherjee, Prime Minister Shri Narendra Modi and the entire political galaxy of India.

As a choreographer the dancer has worked in collaborative projects with different embassies for cross-cultural productions, amongst which RAMAYAN with Japanese Nihonbuyo dancers courted critical acclaim. The artist has been awarded with Sringar Mani and Jayadev Samman by prestigious organisations for her performances.

Extensively written about by eminent media publications, Sangita is currently the artistic director of the cultural organisation, Kalpataru Arts, where she imparts training to the young budding talents, creating new productions apart from promoting Indian art and culture.