Kaavita Das’s journey of movement began at the tender age of three when she initiated training in dance. Since then, she has learnt from renowned gurus in different dance styles--- creative Indian contemporary under Guru Smt. Tanushree Shankar, modern contemporary under Yuko Harada and Kathak under Smt. Sangita Chatterjee.

But as a corporate career took over creative pursuits, Kaavita’s involvement in dance took a backseat. However, realising that the faculty is almost a way to resuscitate the breath into her very existence, she decided to quit her job seven years ago and follow her passion for art and fitness.

She completed her Yoga Masters by Yoga Alliance International from Sri Aurobindo International Yoga Centre and plunged headlong into the realm as a Yoga trainer, an aerialist, a danseuse and a creative movement therapy facilitator.

She turned entrepreneur in 2013 by co-founding The Yoga Chakra, a sought-after establishment in the fitness industry. As its CEO she has been dedicated to helping enthusiasts live a fitter and well-balanced life armed with sound physical and mental health. 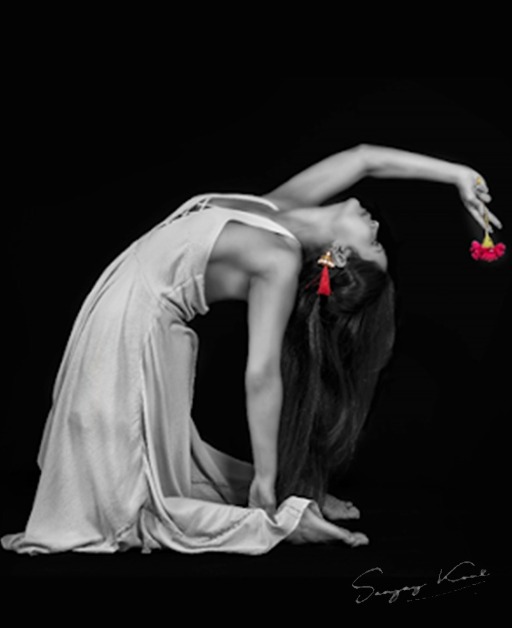 ❝ Dance is the hidden language of the soul ❞

Over the years, several well-known Yoga instructors have obtained their training and certification under Kaavita. Under her guidance they have been running successful Yoga studios as well as instructing as freelancers.

The Yoga Chakra has recently been rated as the best yoga studio in Delhi by Google, Scoopwhoop, Little Black Book and Culture Trip. It also won The National Healthcare Excellence Awards in 2016 for Best Emerging Yoga Studio in Delhi. Apart from these laurels, Kaavita has been adjudged one of the top 10 Yoga instructors in India by Soul Project India.

Kaavita, an ardent traveller, has imparted her knowledge in Yoga in several parts of the globe. She has also been a guest lecturer at various institutions and for events, such as BML Munjal University, News World India, Women Economic Forum, All Ladies League and Doordarshan. Apart from being a regular columnist at The Sentinel, she has also been written about by esteemed media companies such as Discovery Channel, NDTV, TLC, CNN, Times Now, The Times of India, Aaj Tak and Ananda Bazar Patrika.

Her recent accolades include being awarded by WEF and ALL, for Young Leaders creating a better World for all. She was honoured for her work in Yoganritya, an endeavour that brings together Yoga and Indian Classical dance to attain fitness.

Through Yoga and Dance, Kaavita aims to combine her passion, experience and training to create a therapeutic-aesthetic discipline that heals the body and awakens the soul.